Radhakishan Damani is one of India’s most renowned billionaires, businessmen, and investors.

Whenever one talks about the heftiest portfolios in the country, Radhakishan Damani’s name is a must in the list.

Besides his massive portfolio, he is also known for starting one of the largest hypermarkets chains in India under the name DMart.

In today’s blog, we will take a look at his journey from a stockbroker to a billionaire.

We will also be taking a look at the career of RK Damani to learn how he tried different things to become who he is today.

We will also discuss the portfolio that he has built over the past years and the holdings that made his fortune. 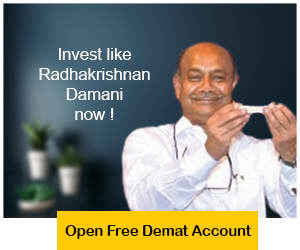 Radhakishan Damani started his career with a small business of ‘ball-bearings.’ 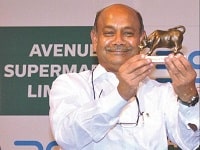 However, due to the sudden demise of his father, he had to quit it and start working as a stockbroker at the age of 32.

Stepping into the stock market as a broker made him realize that he would have to invest and trade his own money to earn from the market.

The decision of investing his own money proved to be a dealbreaker, and RK Damani earned massive profits through different swing trades.

Some of the multi-baggers that boosted the wealth of his portfolio include Century Textiles, India Cement, VST Industries, 3M India, Blue Dart, etc.

With keen consumer interest in retails, he started DMart in 2002.

It has been 20 years since the first outlet of DMart was opened, and this venture proved to be one of the greatest achievements of RK Damani.

In 2017, DMart came up with an IPO under the parent company ‘Avenue Supermarts’ with an issue price of 299 Rupees.

As per Bloomberg Billionaire Indices, RK Damani is in 97th place among the richest people in the world.

RK Damani’s latest holdings at the year-end of 2021 included 14 stocks. These stocks have a combined net worth of over 203,018 crore rupees.

Among these 14 holdings, there are certain companies in which RK Damani holds a significant share.

These companies include the following:

Being the founder of DMart (listed as Avenue Supermarts Ltd), RK Damani is a major stakeholder in the company’s share capital.

RK Damani has kept his stake in the company quite consistent during the past few years.

VST Industries is another major holding in RK Damani’s portfolio, with nearly 32.3% in the company.

Talking about the change in his stake in VST Industries over the years, we realize that VST Industries has been a part of RK Damani’s portfolio for a long time.

India Cements Ltd. is yet another multi-bagger in the portfolio of Radhakishan Damani.

Presently, he holds a stake of nearly 12.7% in the company’s share capital. This stake is worth more than 812 crore rupees.

Talking about his shareholding pattern in India Cements, he had merely a 4.7% stake in the company at year end 2019.

However, in the last two years, he steadily increased his stake and eventually increased it to 12.7%.

Due to the market crash in March 2020, we saw a lot of Portfolios tumble. However, by the end of the year, everything was back to normal.

In 2020, RK Damani had over 19 holdings in his portfolio worth 205,012 crore rupees. First, however, we will talk about the ones in which he had a considerable stake.

Let us look at RK Damani’s major holding during the year 2020.

However, his stake in these companies was 1% or less during 2020.

If we look at his major holdings, we realize that he had changed his stake in various stocks during the year.

However, he increased his stake in other holdings. At the beginning of the year, he had a 4.7% stake in India Cements, which increased to 12.7%.

Similarly, his stake in VST Industries increased from 29.2% to 31%.

Two fresh additions to RK Damani’s portfolio in the year 2020 were Mangalam Organics Ltd and Sundaram Finance Ltd, with a stake of 2.2% and 2.4%, respectively.

Let us look at some of his major holdings in the year 2019.

Talking about the changes in RK Damani’s portfolio during the year 2019, we notice that there were multiple new holdings added.

Other than the new holdings mentioned above, there were not many changes in the stake of other holdings.

However, the stocks removed from the portfolio during the year 2019 were Advani Hotels and Resorts (India) Ltd and Sundaram Finance Ltd.

However, the latter was added back to the portfolio in the year 2020.

RK Damani’s portfolio during 2018 was relatively simple, with 11 holdings.

His holdings with a significant stake during the year include:

Apart from these, a few other holdings were also in RK Damani’s portfolio.

However, the interesting fact about his portfolio during 2018 was its stability and consistency.

In this particular year, he did not make significant changes concerning his stake in different holdings.

The only new addition to his portfolio during 2018 was Sundaram Finance Holdings Ltd.

What is Radhakishan Damani’s Net Worth?

As discussed earlier, Radhakishan Damani is among the Top 100 richest people globally. In fact, as per the reports of Forbes India, he is the 4th richest person in the country.

The following table will help us understand how RK Damani grew his portfolio and wealth. We will also be looking at the setbacks his portfolio had to face due to market crashes etc.

During 2016, RK Damani’s net worth did not tumble much. However, his portfolio fell by nearly 18% in the last quarter.

Though the year-end net worth compared to the beginning of the year didn’t change much and closed at 1508 crore rupees.

However, the most prominent change in his portfolio took place in Quarter-1 of 2017 with the IPO of DMart.

His portfolio kept outperforming the markets throughout the year and reached a net worth of 55,299 crore rupees by the end of 2017.

The next two years were quite consistent in growth with no major setbacks in the portfolio.

However, another big move in RK Damani’s portfolio happened in the September Quarter of 2019 when his portfolio value increased by 29%.

Eventually, the net worth by the year-end of 2019 was 83,900 crore rupees. After that, the portfolio kept rising, with another major movement coming at the end of 2020.

During the year 2021, there was no downward move in his portfolio, and it kept rising steadily.

As discussed earlier, RK Damani’s net worth is 202,248 crore rupees, with his major holdings being Avenue Supermarts, VST Industries, and India Cements.

DMart, listed as Avenue Supermarts, is one of the greatest achievements of RK Damani and major support to his rising portfolio.

The IPO of DMart changed his fortune and manifold his net worth from 1508 crore rupees to 30,315 crore rupees.

Presently, he is a major stakeholder in DMart with 65% ownership and the 4th richest person in the country.